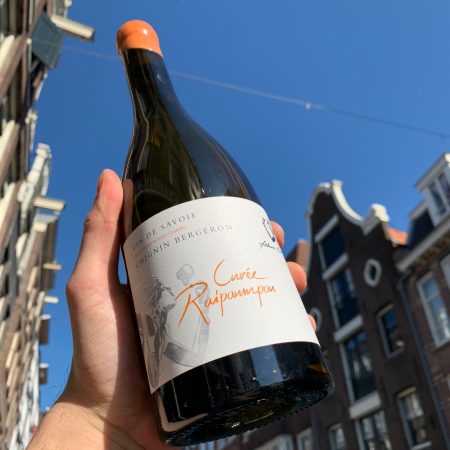 Character: Amazingly lifted and linear expression of Rousanne, like a bowlful of apricots & cream carried by a cold mountain stream. Beautiful balance of fat, freshness, and chewy minerality. Delicious now but built for the long haul.

Adrien Berlioz is a young and upcoming producer in Chignin whose wines have become very rare and sought after in the last couple of years. This passionate but humble vigneron is the cousin and neighbor of the more well-known Gilles Berlioz, who is partly responsible for putting low-yield organically farmed Savoie wines in the crosshairs of sommeliers and cavistes around the world.

Having started out in 2006 with a tiny family estate, Adrien now produces a mind-bending array of different cuvees from about 5 hectares of vineyard on the south-eastern outskirts of the French Alps. His holdings are in steep (sometimes over 50%) lieu-dits on thin crumbling topsoils over deep limestone slopes, which he painstakingly farms by hand or with horse-plow. His grapes – a cross-section of indigenous white and red Savoie varieties – are tended biodynamically, harvested by hand and rigidly sorted before vinifications.