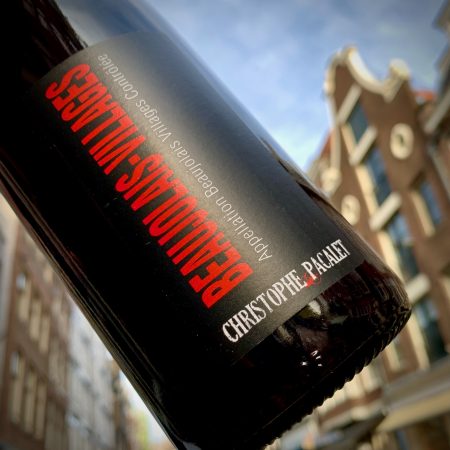 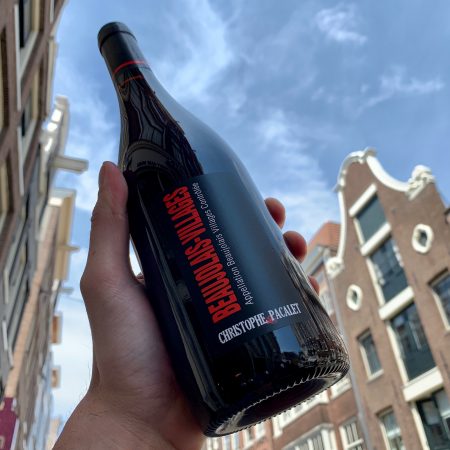 The brightest cuvée of Christophe’s range. Fresh and delicate nose of red berries, violets and green herbs. Light-weight and velvety on the palate which, moving to deeper fruit mid-palate, which is then picked up by refreshing acidity. Very quaffable stuff.

Hand-harvested Gamay from lieu-dits in La Chapelle de Guingchay and Lantignié. In La Chapelle the soil is dominated by ancient alluvial rocks and in Lantignié granite. Whole bunch cold-carbonic maceration for 2-3 weeks, fermentation only on indigenous yeasts and without SO2. Manual pressing with an antique vertical wooden press. Elevage on fine lees in used oak vats and concrete tanks for 5-8 months. Minimal SO2 at bottling.

Christophe Pacalet is a micro-negociant that vinifies a plethora of different Beaujolais appellations at his winery in Cercié, just outside of Villié-Morgon. After studying biology and chemistry and spending 9 years as a cook in Lyon and the Caribbean, Pacalet chose to settle down and make wine in his home region, the Beaujolais. He had already picked up the basics of the craft helping his uncle (the late Morgon maestro Marcel Lapierre) in the cellar, and in 1999 this same uncle helped Christophe set up his own winery.

Here he vinifies purchased grapes from a range of different appellations, among them Beaujolais-Villages, Fleurie, Saint-Amour and Moulin a Vent. Together with his cousin, the infamous négoce Bourgogne-producer Philippe Pacalet, he’s reshaping how we think about wine made from “bought grapes”.

Pacelet is able to maintain relatively stable contracts with his growers, and although he doesn’t farm most of them himself, he has personally picked all of the plots and vines his grapes come from and influences their conversion to organic farming where necessary. More importantly, he harvests all of the grapes himself, together with a close-knit team consisting of the same people every year. Sorting is done at the moment of picking, not at the table: only the best grapes are brought back to the cellar, the others are left for the grower or simply dropped on the ground. Pacalet may not be able to call the vineyards his own, but he definitely gets up-close and personal where it counts most.