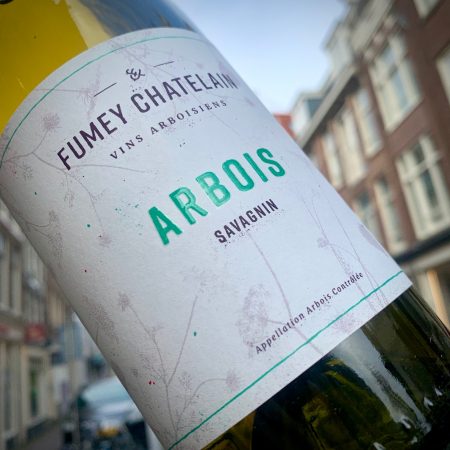 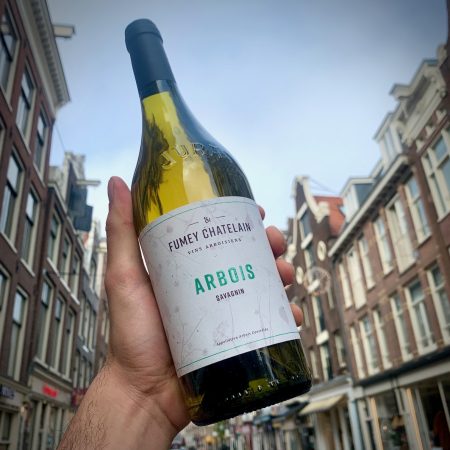 Deep and layered but ultimately refreshing wine in the classic oxidative Jura style. Blend of vintages, aged 2-3 years under flor. Heady nose of green apple, toasted nuts, almond milk and roast curry spice. Broad and structured on the palate, profoundly salty with a hint of butterscotch and cream. Unfined and unfiltered.

There we go, Chabrol’s first foray into the Jura region! And what a find, the ambitious but still somewhat under-the-radar Domaine Fumey-Chatelain! Beautifully pure but stable wines made on the cutting edge of tradition and contemporary ideas, for almost endearingly sympathetic prices for this day and age.

Fumey-Chatelain is a domain with about 17 hectares of organically tended vineyard in the Arbois appellation. This small family business was founded some 30 years ago by Raphaël Fumey (cousin of Stéphane Tissot and Frédéric Lornet) and his wife Adeline Chatelain, initially just to grow grapes to sell to negociants.

However, when the terrible frost of 1991 destroyed about 95% of their vineyards, Raphael and Adeline decided to vinify the remaining grapes themselves. The resulting wines turned out rather well, and after a few years of relatively make-shift operations in 1999 they found an old farm in Montigny-lès-Arsures to settle in permanently.

The company is now spearheaded by their young and energetic son Marin, who has been combining winemaking duties at home with internships abroad since 2015 (including at Crystallum in South Africa and Burn Cottage in New Zealand). Under his leadership, the conversion to organic farming was set in (they’re now practicing and soon certified, aiming to be fully biodynamic as of 2022) as well as an active focus on the international market.

Tradition and international ambition blend together equally well in the wine cellar. All the domain’s wines are vinified naturally, with wild yeasts and no additives. Some of them get an old-fashioned elevage on old oak, possibly ”sous voile”, but they also like to work with 100% aging in the tank. Almost all cuvées are bottled unfined and unfiltered, protected by a little bit of added sulphites.

We are very happy to be able to work with Fumey-Chatelain and their wines. For us importers, a good Jura vigneron that isn’t fully claimed and allocated is a rare sight, so we’re ecstatic that we’ve found a domain as energetic and forward-thinking as this. Cheers to the future!